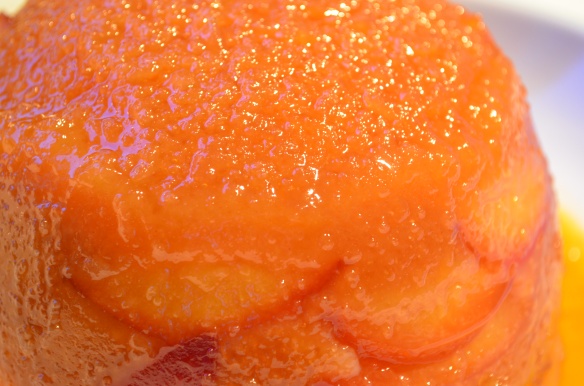 It’s a bit of a cheat, putting this recipe in, because it is in fact Andrea’s Steamed Ginger Pudding again, only with a couple of sliced plums arranged artistically at the bottom of the bowl.  To compensate, however, I will include a foolproof recipe for homemade custard. 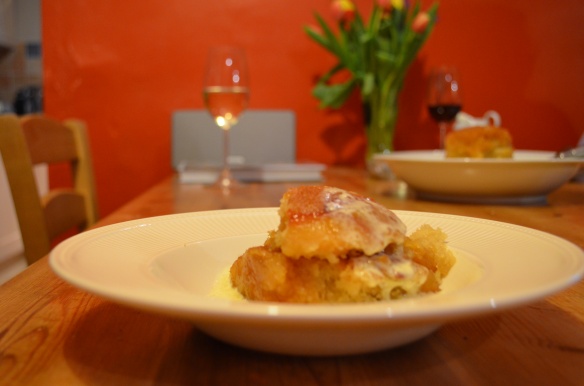 a teaspoonful of ground ginger

Put the kettle on to boil and butter a pudding bowl.  A bowl which is purpose built with its own lid is handy here.  I used these ones:  http://www.lakeland.co.uk/13871/2-pint-Lidded-Pudding-Basins

Put the first six ingredients plus four balls of stem ginger into the food processor and whoosh up until smooth.  Add a little more milk if necessary to make it a pourable mixture.

Put the boiling water into a large, lidded saucepan and turn on the heat.

Slice a couple of plums and layer them over the bottom of the basin.  Pour about 50g stem ginger syrup and 150g golden syrup over the plums.  Pour the sponge mixture over the syrups.  Put the buttered lid on top, then pop it into the pan of hot water.  Keep it boiling, but not ferociously and keep the pan lid on.  Keep topping up the hot water; it should more than half fill the pan.

Let it cook for at least two hours.

When you’re ready to serve it, make the custard.

Bring 300ml double cream gently to a simmer with a vanilla pod (cut open along its length).

Meanwhile, whisk 3 egg yolks with a dessertspoon of sugar.

11 thoughts on “Plum and Stem Ginger Pudding with Custard”